What’s the best portable video game consoles to buy in 2020? Or the best Nintendo handheld console, for that matter? Well, in the modern world, there are more ways to game than ever before. From Powerful PC setups to accessible mainstream consoles, each platform provides players with the tools necessary to immerse themselves in an all-enveloping world.

For instance, frequent travelers may wish to game on the go, with a portable, lightweight system. Meanwhile, others may prioritize features above all else. But also, the extent of the gadget’s gaming library could be an essential factor for many when choosing the right handheld device.

The fact is it all boils down to personal preference. Either way, there are more options on the market than ever before.

Today, we’re going to explore all key options open to the player, in a bid to find the best portable gaming device. Along the way, we’ll also provide some potential top-picks. Whereby our criteria will revolve around value for money, and the number of features included.

So, what are we waiting for, folks? Here is our exclusive list of the best, handheld gaming consoles to buy in 2020. 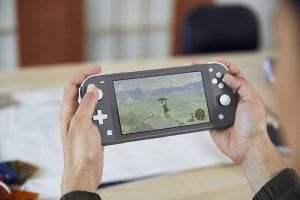 First up, in our bid to find the best portable gaming device is Nintendo‘s, Switch Lite. As the latest in a lavish line of Nintendo handheld consoles, the Switch Lite issues a purely portable-centric experience. Meaning, it cannot connect to a TV and comes without the transformative Joy-con control sticks. So, games designed explicitly with Joy-con in mind, won’t work.

Also, the Switch Lite comes in a variety of colors, including Grey, Turquoise, and Yellow. Thus, giving players plenty of choices when it comes to aesthetics. 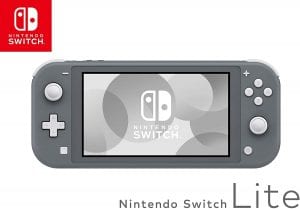 Much like the Nintendo Switch, players have access to 32 GB of internal storage as standard, which can scale up to 2TB, with the use of a micro SDXC or microSD card.

One major downside, though, is the size of the screen. At 5.5 inches, the LCD layout shrinks to a smaller scale. But thankfully, players can still enjoy an optimum screen resolution of 1280x 720.

On top of that, the system is super-light, weighing in at 0.61 pounds. Taking approximately 3 hours to charge, which amounts to 3-7 hours, depending on how demanding your game is, the Switch lite provides excellent value for money, granting access to a wholesome host of games. Not to mention its structurally sound design and ease of use.

All in all, the Nintendo Switch Lite is a high-quality device and a superior model to most other options currently occupying on the market.

As an all-round Nintendo handheld console, this is perhaps the best portable gaming device out there. 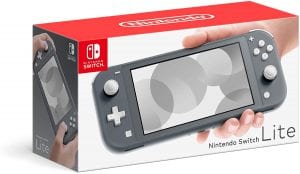 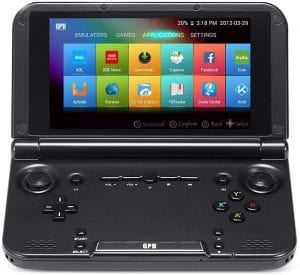 Next up, we have the GPD XD PLUS. The main draw factor with this model is the option to play titles from multiple systems. With online connectivity, it’s also great for downloading apps over Wi-fi, with instant access to the Android market. So, video viewing is also a valid option.

It may not be a Nintendo handheld console, but with 8-hours battery life, coupled with its pocket-sized frame, the GPD XD PLUS is ideal for long excursions. But also, as a portable option on the go. Unfortunately, because of its diminutive size, the user interface is scaled down. So sadly, this leads to smaller buttons, which can make playing more of a fiddly process. 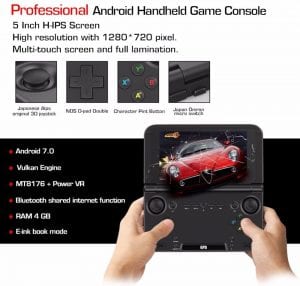 In terms of raw power, the GPD packs quite the punch. In many ways, the GPD XD PLUS is more like a tablet, with its impressive 4GB DDR3 RAM and MT8176 CPU. Just with the bonus of a foldout pad.

However, the sad reality is, games are only downloadable. Meaning, nothing comes preinstalled, aside from the emulators. So those looking for a plug-in and play experience will go away disappointed. 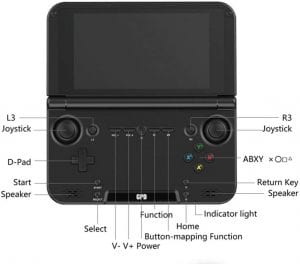 Overall, this is a feature-rich system. But sadly, any gameplay becomes hampered by lousy button scaling. Additionally, the GPD XD PLUS provides a comparatively smaller screen when pitted against other models. 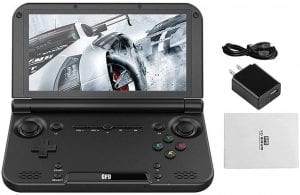 to access to more options and other bundled deals on GPD XD Plus. 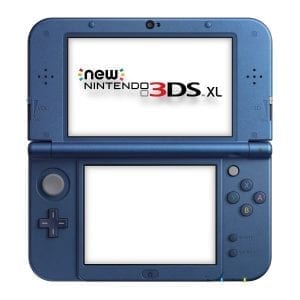 The clue is in the name. The Nintendo New 3DS XL grants players the option to play games and view content in 3D. Awesome. Thus, issuing added levels of immersion, with extra dimensions.

At 0.6 pounds, the Nintendo New 3DS XL is travel-lite, with tiny proportions. So, it should snuggly tuck into the pocket with ease. The two-part foldable screen, which comes in at 4.88-inches above, and 4.18 inches below, also issues added protection. 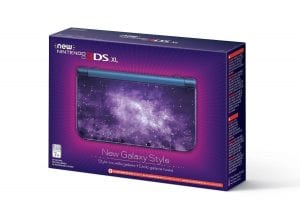 The console’s compact size allows it to house a stylus, used to navigate menus, and play games. Sadly though, it’s a little on the small side. You’ll also have to buy an AC charger separately.

As far as Nintendo Handheld consoles go, the Nintendo New 3DS XL is easily one of the most efficient models on the market.

It could well be the best portable gaming device.

to access to more options and other bundled deals on Nintendo New 3DS XL. 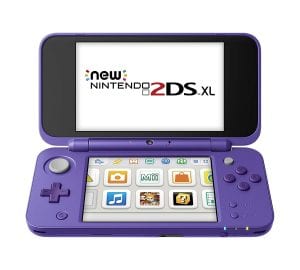 First off, let’s start with the plus points. The New Nintendo 2DS XL gives players unlimited access to the entire 3DS library of games. At a cost, of course.

Additionally, the base version comes with a preinstalled copy of Mario Kart 7. So, you’ll instantaneously have something to enjoy. Unfortunately, though, the smaller screen, although foldable, does somewhat limit the viewing experience.

And with an LCD at only 400 X 240, the screen is less than optimal with other models offering far superior resolutions. 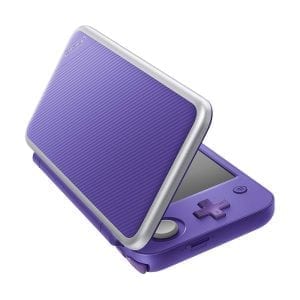 That said, the neat addition of the C-stick does give players an added sense of movability, on top of the regular circle pad.

Overall, the system takes about 3 hours to charge, while the battery drains depending on the game type. 3DS games require more processing power, and so consume far more battery life than DS games.

To summarise, the New Nintendo 2DS XL is another superb Nintendo handheld console. And in my mind, it is a surefire contender for the best portable gaming device of 2020. 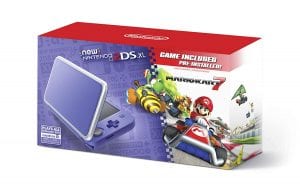 to access to more options and other bundled deals on New Nintendo 2DS XL. 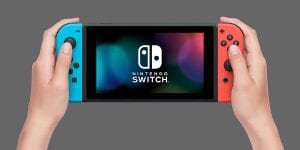 Lastly, but not least, we have the Nintendo Switch. The critical element that sets it apart from the rest of the pack of portable devices is the option to game at home. After all, comfort is vital. But also, on the go. To game in your living room, just slot the Switch into the included stand.

Meanwhile, the detachable Joy-Con controllers mean you can play via a pad wirelessly, while propping up the screen anywhere, by using the kickstand.

You’ll also have the option to play tons of video games via Nintendo’s internal Estore. But alternatively, you can just as quickly play physical copies. 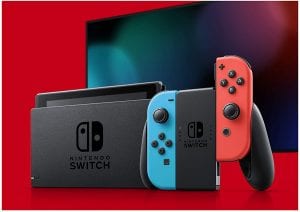 You also have expandable memory of up to 2TB using a Micro SD card, but the system comes set up with only 32 GB. But bear in mind, system data will also take up significant space. Despite a massive amount of titles available, many of the big-budget releases, such as Zelda and Mario, are far more expensive than other contemporary titles on the system. 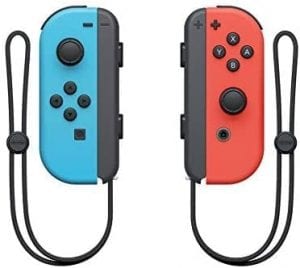 As of 2019, the Nintendo Switch comes with improved battery life, ranging from 4.5-9 hours, while Bluetooth headphones are an impossibility without the use of an appropriate dongle.

Overall, the Switch is a powerful Nintendo handheld console, but not the best portable gaming device out there. It still, however, stands as one of the top contenders. 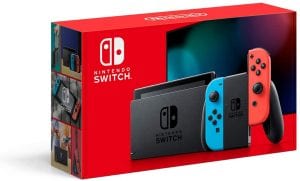 to access to more options and other bundled deals on Nintendo Switch.

As you can see, we whittled this list of the best portable gaming devices down to five. But each candidate has something unique to offer. It all depends on what setup feel’s right for you.

Whether it’s a Nintendo handheld console or not. Just be aware that a lower price tag, can often lead to a lesser screen resolution. And with it, a lack of overall quality. But that’s not always the case, and cheaper alternatives can be equally beneficial.

Keep in mind that battery life and charging capabilities are just as important. If you plan to game, away from a power supply for any significant time, then these two elements become vital when deciding.

Whichever one you pick, each of these entries is good enough to grace this list of the best portable gaming device to buy in 2020.

The choice is ultimately up to you! But now that we’ve narrowed down the search and saved you some time, we wish you good luck with all your portable gaming endeavors!

So, Godspeed and game on!

Check out on more exceptional deals on Amazon – Nintendo